As I began to write this post about our changing country and my experience over the weekend I couldn’t help but remember the words Robert Kennedy spoke in 1966 while visiting South Africa during Apartheid:

There is a Chinese curse which says “May he live in interesting times.” Like it or not, we live in interesting times. They are times of danger and uncertainty, but they are also the most creative of any time in the history of mankind. And everyone here will ultimately be judged – will ultimately judge himself – on the effort he has contributed to building a new world society and the extent to which his ideals and goals have shaped that effort.

Unless you’ve been living under a rock (or were a contestant on Big Brother [see here]) you know that Donald Trump will be the next President of the United States. Fortunately for America, the vast majority of people in the United States – including those who voted – did not want to see this man anywhere close to the White House. So what do we do? 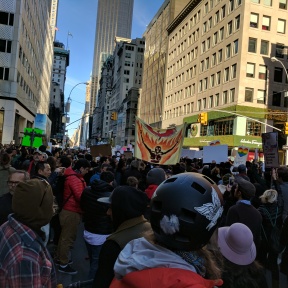 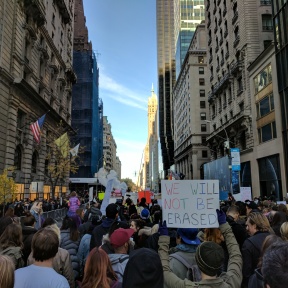 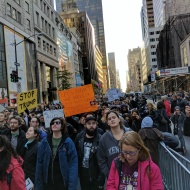 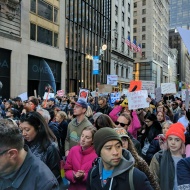 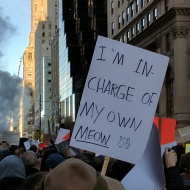 I had the privilege to attend a rally in Manhattan against the election of Donald Trump. We began at Union Square and walked all the way up to Trump Tower on 57th Street and 5th Avenue. I’ll be honest, I didn’t know what to expect. I’d been to rallies before in New York City, but this was really my first big one. From everything I’d seen in the media I half expected there to be people yelling at cops, people pushing and shoving, a possible knock down of barriers and arrests on the spot.

What I found was the complete opposite. The police were more than cordial. They actually smiled at us and seemed to agree with the notion that we cannot simply lie down and accept a lying, racist, sexist bigot to run our country. The protesters were on point and knew where to go and what to do so no one was out of the loop. We knew where to march and where not to march. There were a few Trump hecklers on the side, but the three we saw were vastly outnumbered by the tens of thousands of people marching towards Trump Tower.

We were one united people. Everyone around us was respectful to one another (and this is New York City, mind you) and supportive of our cause. Chant after chant rang through the crowd as we proudly held our signs high. We made sure Trump and the rest of the country heard our anger and frustration that the Electoral College (not the people, mind you, since Hillary Clinton did win the popular vote) chose not just the most incompetent man ever to hold the office of the Presidency, but a noted racist and sexist who stands for nothing that our country was founded on.

But where am I getting at with this? Sure, we will always have “bad” leaders throughout the world. They’ll rise up out of the despots of tyranny and ignorance. Look at Great Britain’s recent stunt with Brexit, or the new leader of the Philippines, and don’t get me started on Russia and Putin. People go through these terrible leaders as much as the sun rises and falls each day.

What I’m getting at is this: we owe it to ourselves to be better than those who have come before us. We owe it to ourselves to leave this world a better place for our children and grandchildren. Instead, it seems greed has poisoned too many souls in this world and selfishness has become the new normal. We must act up and fight back, not just against the bigotry which a Trump presidency will undoubtedly try to normalize.

That is why we must act up and fight back. Not just against the bigotry which a Trump presidency will undoubtedly try to normalize, but against the notion that we are only for ourselves and no one else. That is not who we are. We are a world of compassion and empathy. When someone falls down we help pick them up.

So when you see hate in this world or malice towards one, remember they are not the only ones suffering. We all suffer from injustice, and it’s time to take a stand and give that assistance to anyone who needs it.