White supremacist Richard Spencer was recently punched while being interviewed by an Australian news organization. Now, while I never condone violence against any individual let’s look at the facts of what Richard Spencer stands for and whether the actions are justified:

1. He considers himself one of the founding members of the “Alt-Right” movement. If you don’t know what that is, I’ll sum it up for you: white supremacists who wear suits instead of hoods and who rally in rented halls instead of around burning crosses. They are the modern Ku Klux Klan who refuse to call themselves that because they know they’ll get a bad rap for it.

2. In Washington D.C., at his last rally on white supremacy and why the world was built by white people, his speech ended with “Hail Trump, hail our people!” I won’t link to it because I don’t want it to garner views. In the audience, though, you can see various members performing the Nazi salute at him. When asked about this, Spencer just replied that some people got really worked up over the speech.

As a person who believes in equality for all people on this planet – that means regardless of gender, ethnicity, race, age, or sexuality – I find this immensely frustrating that there are those who wish to give this man of ignorance and intolerance a voice while there are so many others preaching what needs to be said to help heal our divided world, let alone our country. So what were my feelings when I saw Spencer get “socked in the face” as CNN put it? I was overjoyed. The white privileged KKK hiding by a suit fascist got what was coming to him. Once again, I never condone violence against anyone, but for someone with a heart as black and destructive as Spencer’s is I’m honestly surprised he didn’t receive anything more than that.

Oh, and what was the last thing out of his mouth before he was punched? Someone was asking him about the Pepe the frog pin on his jacket, which has now been labeled as a hate symbol, and he atte

mpted to explain what it symbolized. Do you know what Pepe the frog symbolizes? White supremacy. So, the folks behind him asking if he was a neo-Nazi and why he hated black people had every right to ask those questions because, like Donald Trump, this man lives in his own alternate reality where society was created and preserved by whites and that because of interracial mixing we are destroying society and harmony and whites are now becoming a minority. Let me tell you something, buddy: I live in New York City, one of the most diverse cities in the world and whites are already a minority and we’ve got some of the best and brightest minds in the world right here who aren’t what you consider “white” and we’re prospering more than ever. So you can take your notion of a white society dying out and shove it where the sun don’t shine.

Now, some are angry that violence was committed during this interview, but afterwards, Spencer refused to file a police report, never called 911, and never asked the police to find the person who did it. You know how we usually respond to people who respond to acts like this? We give them a big ol’ shrug because we’ve got people of color being shot down in the street with their hands up and their backs turned to the police yet their cries for justice go unheard. We have Native Americans who live in some of the most impoverished portions of America who ask for support from the government to stop their record-breaking number of suicides and receive nothing in return. We’ve got women being denied the right to make decisions for their own bodies in the year 2017 CE- not BCE. They have to potentially travel hundreds of miles to receive affordable healthcare and other services even after our Supreme Court determined the Constitution gr

ants the right to privacy to you, your body, and what you wish to do with it.

So, Mr. Spencer, the only thing I can say to you is: welcome to the real world. Get used to it or get out, because we are marching onwards towards the mountaintop of progress.

Now, for your enjoyment, I’ve included photographs of important people also punching Nazis. So the next time you’re wondering whether or not it’s okay to punch a Nazi just take a look at the shots below and think about what you would do in their situation. 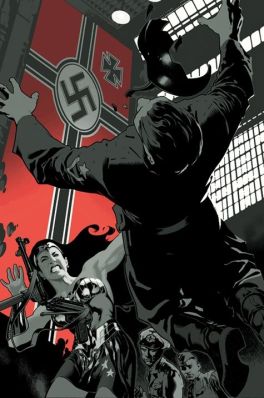