There will always be moments in our lives where we’ll be stuck in our tracks. As if, no matter where we turn, we’re either going in circles or hitting a wall. Our spirits may feel crushed, our hearts may be broken, but still, we press onwards. Why? Because even

when the doors feel shut and the windows are nailed down there is still the smallest glimmer of light coming through the cracks, and that’s what keeps us moving. Something that’s important about that glimmer of light, though, is where it comes from. It doesn’t come from anything we own or even someone we love. It comes from within ourselves.

It’s something Bobby had to reconcile with after his brother was assassinated. He worked for nearly 15 years as his brother’s keeper, cleaning up his messes and making him out to look like the more capable and compassionate one. Bobby was known as the ruthless one who was out for blood whenever something tried to throw off Jack’s trajectory towards the White House, and once he had it, he became his chief confidant – especially after the Bay of Pigs disaster. Jack needed someone he could trust in his administration, and Bobby became it. Because Jack knew that Bobby would do anything for him.

When his life was tragically cut short, though, even Bobby was stunned. He was quoted 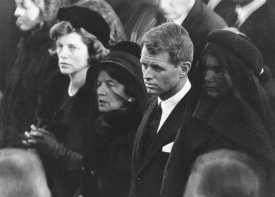 as saying that he knew that someone would get one of them but he always assumed it would be him, not Jack. Nevertheless, he was thrown out into the real world without someone to protect, someone to care for, someone to look to the light for. His whole life revolved around his brother, and now this Sun he spun around had flickered out.

And the darkness did creep in. It filled Bobby with such a depression that everyone noticed the changes in his demeanor. His once joyous office was now a silent place filled with sadness and broken dreams that never were. As Bobby tried to find his footing after this gigantic fall, he tried to distinguish what he was doing for himself versus what he was doing for Jack. When people would cheer his name he would question whether the cheering was for him or his brother. He was afraid of being overshadowed by his brother because Bobby saw him this way: someone who was a martyr who was taken far too soon and would be the penultimate Kennedy.

So Bobby had to look within himself to find that light he used to find so much in his brother. His map needed to be rewritten. All his goals needed to be reoriented towards himself, because now he was the most important person in his life, and he wasn’t used to it. He stumbled and fell a few times, especially when it came to the idea of what he wanted during the Election of 1964. Many thought he would try to run with Lyndon Johnson as Vice President, but in the end, he decided to run for the Senate, a choice that came at nearly the last second.

Still, it placed him on a path of his own choosing. He started to become himself. The ruthless Bobby that people knew of? He was gone, replaced now with a man who was, literally, the only white politician any black

American trusted. He spoke of us all being ripples of hope towards enacting change. He spoke of having compassion and empathy towards one another, of making gentle the life of this world.

And why? Because he kept moving forward. Bobby hit one of the biggest obstacles any of us will ever face, and he continued to push through it because through all that uncomfortability comes progress. Through the pain comes change. Through the darkness comes light.

So if you’re feeling like you’re stuck in a rut, or like everything is against you: don’t give up. Push onwards. You’re stronger than you look, and you’re braver than you know. Just look for that glint of light in the darkness and remember: Always Forward, Forward Always.