We live in a world where we shut ourselves up in our heads and hide there with the belief that by staying there we’ll be safe. Unfortunately, from personal experience, I can

tell you that the most dangerous place in the world is the six inches between my ears. We need to be open to others – the good and the bad – and stop thinking that we can think our way out of the problems around us. When you use your own thought process to try and solve your problems you’ll be surprised at how quickly you become exhausted from going in circles, like a dog chasing its tail.

Well, then, what are we to do? We break the habit. Sounds simple, right? Just stop thinking the way you do, they say. Then you’ll get better. Well, I don’t know about you, but I’ve been thinking the same way for 30 odd years and to tell me to just change my way of thinking isn’t necessarily going to be fully possible. What’s important, though, is to be willing to change. To have an open heart and an open mind can be your greatest ally on the days when you feel everything is crumbling around you.

END_OF_DOCUMENT_TOKEN_TO_BE_REPLACED

Take a look at that shiny new smartphone you have, or maybe the big screen TV you 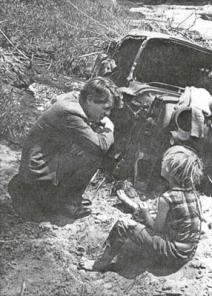 have at home. Pretty sweet, right? You’ve got these great commodities which you worked so hard for and now that you have them in your life you should feel happier, right? You now have what you worked for. It’s in your life now, and you can take pride in it.

As our sesquipedalian Cheeto-faced orange of a president states so eloquently: Wrong.

END_OF_DOCUMENT_TOKEN_TO_BE_REPLACED

I’ve been receiving some messages and comments on both this blog and my page based off some of the posts I’ve made, whether they be things I write myself or things I share from others. For those who want to poke fun at my anger on this blog towards a certain orange-tinted president because this blog is called Tame The Savageness, let me give you a little history lesson. So buckle up, sit back, and enjoy the ride.

On April 8, 1968, Robert Kennedy was on his way to a routine campaign stop in Indianapolis, Indiana while running for president. Before boarding his plane to head there he was informed that Martin Luther King, Jr. was shot, and when he landed in Indianapolis he learned that he had unfortunately succumbed to his wounds. Immediately, his closest advisers wanted him to cancel his appearance in Indianapolis, but Kennedy thought differently. He knew at that time, that those at his campaign stop (who were mostly African American) needed to hear words of healing rather than divisiveness. At such a time, their anger could become so uncontrollable that it could potentially burn the city down, which ended up happening in dozens of cities around the country that night. The memories of his own brother’s assassination not more than five years prior were also most certainly on his mind.
So he traveled to the stop taking some notes  on the way written by his speech writer, but mostly deciding in his head on what to say. He stood on the back of a dilapidated pick up truck. Tears in his eyes from learning of King’s assassination still remained as he told those who came to see him give a routine campaign speech to lower their signs.

Now, many of those at this event had not yet found out about King’s assassination. And Bobby would be the first to tell them.

I have bad news for you, for all of our fellow citizens, and people who love peace all over the world, and that is that Martin Luther King was shot and killed tonight.

Cries and screams could be heard from the crowd as they heard from some who called him that “blue-eyed soul brother” due to his tremendous popularity among African Americans explain not his hope for them to not be angry but to know that he understood that anger.

In this difficult day, in this difficult time for the United States, it is perhaps well to ask what kind of a nation we are and what direction we want to move in. For those of you who are black–considering the evidence there evidently is that there were white people who were responsible–you can be filled with bitterness, with hatred, and a desire for revenge. We can move in that direction as a country, in great polarization–black people amongst black, white people amongst white, filled with hatred toward one another.

Bobby knew the consequences that King’s assassination could have on this nation. So he offered another alternative. This time, adding in his own understanding of their tears, screams, unspeakable hurts, and inconsolable hearts.

Or we can make an effort, as Martin Luther King did, to understand and to comprehend, and to replace that violence, that stain of bloodshed that has spread across our land, with an effort to understand with compassion and love.

For those of you who are black and are tempted to be filled with hatred and distrust at the injustice of such an act, against all white people, I can only say that I feel in my own heart the same kind of feeling. I had a member of my family killed, but he was killed by a white man. But we have to make an effort in the United States, we have to make an effort to understand, to go beyond these rather difficult times.

Mind you, this was truly, really the first time Bobby spoke publicly about the assassination of his brother. Never did he speak about it to anyone, instead keeping that pain internal and trying to learn from it.

He spent the years after his brother, President John F. Kennedy, was assassinated trying to understand how God could allow such an awful thing to happen, and eventually it became something more. It became him trying to understand how we as a nation could allow such horrible travesties as letting millions live in poverty with no help of escape, sending millions of soldiers to die in wars which needn’t be fought, and how suffering in what was known as the greatest country in the world could prosper while those at the top of those with power did nothing.

That was how he came to learn of the works of Greek playwrights and poets like Aeschylus and existential philosophers like Albert Camus, who helped try to turn his emotion into works he never himself could find within.

My favorite poet was Aeschylus. He wrote: “In our sleep, pain which cannot forget falls drop by drop upon the heart until, in our own despair, against our will, comes wisdom through the awful grace of God.”

He spoke at length about not the end of struggles, but the continuation of progress towards making these struggles easier and easier to solve, because he knew the solutions would never be easy and that the problems would most likely outlive him, but his hope in future generations to take up the mantle that his brother, Martin Luther King, Jr., and many others originally lit was optimistic.

He also believed in the same ideals shared around the nation regarding the various degrees of violence and racism in this country at the time.

And this next line, my friends, is where the title of my blog comes from. This line has always spoken far greater to me than any other political speech of our time. Whether it be FDR’s Nothing to Fear But Fear Itself speech, JFK’s Ich Bin Ein Berliner speech, Reagan’s Tear Down This Wall speech, George W. Bush’s 9/11 Ground Zero speech, or even the incredible rhetoric of President Barack Obama.

Why? Because it calls out what humans really are: savages. We are animals and nothing more. Sure, we may have complicated systems of communication and ways of living, but in the end we belong to Kingdom Animalia of the five kingdoms and we have shown at various times of history that we are indeed capable of the most savage of deeds. From the salting of Carthage, to the slaughtering of millions by the Huns in Asia, to the vicious and utterly destructive wars we’ve fought since the dawn of time, not to mention the Holocaust, the Soviet Gulags, Mao’s Great Leap Forward, and today’s atrocities brought to the Palestinians, Syrians, North Koreans, and South Sudanese we have truly shown our savageness. And it will not end there.

Robert Kennedy’s wish at the end of this short speech was simple. And it remains impactful to this day.

Let us dedicate ourselves to what the Greeks wrote so many years ago: to tame the savageness of man and make gentle the life of this world.

While we are indeed capable of great tragedies, we are capable of some of the greatest successes and advances in history. We built countries with governments elected by its citizens, we’ve put men and women in space – some even on the moon, we’ve cured diseases and nearly eradicated ones which killed millions not more than a century ago. We fought wars against injustice and on poverty instead of on each other.

And we seem to have lost that. We seem to have devolved back into the world of savageness where those suffering are left to fend for themselves while those more affluent or at the top can proposer more and line their pockets with money made on the backs of workers they pay less than they should to. We’ve let ideas of race and invisible boundaries tear us apart now more than ever. We cling to our religions while scrutinizing or being frightened of others without learning about what it is we’re even frightened about.

So instead of taming the savageness of man we have become a much more ignorant, uneducated, frightened society simply because we refuse to try and understand what it is we are afraid of. What lies in the shadows will terrify you only until you turn the light on to realize it is nothing more than just your imagnition.

This blog was created to continue Robert Kennedy’s legacy of wanting to tame the savageness of man. That means calling out divisiveness when I see it, ignorance when it is uttered, and educating people on what they do not know. I look to find ways whenever possible to heal suffering, bring people together, and end the divides which strangle us day in and day out.

I look to put no one down and I do not say in any way that I know more than anyone else. But when the gadget in your hand has the same amount of power we used to send a man to the moon, I believe it is time to open your mouth and speak out against what is wrong in this world, and that sometimes means getting angry and frustrated with where things are headed.

Will we all agree on what is right and wrong? Of course not, but there are a number of consensuses we can agree on that need to be changed. And that’s what I’m here to do. To begin a dialogue to find them and that together we can become those who indeed tame the savageness of man and make this world a better place to live in.

So instead of arguing, reach out. We’re all here to help. We just need to work together.

The video recording of Bobby’s speech can be found here.

Follow To Tame the Savageness of Man on WordPress.com